Evans strikes late to rescue Bluebirds a point against Dragons 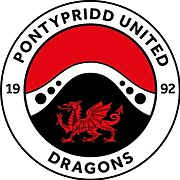 Clayton Green had given the visitors the lead in the early stages of the second half, and it appeared that the Bluebirds were heading for a second defeat in five days, but Evans – with the help of Dragons goalkeeper Ashley Morris – ensured County had something to show for their efforts.

Neither team was able to trouble the goal with any regularity, as the wet conditions played their part at the Ogi Bridge Meadow.

The result sees the Bluebirds remain seventh, still mathematically with a chance of finishing in the Championship Conference, however they will likely have to settle for a place in the bottom six.

Manager Tony Pennock made five changes to the team that lost 3-2 to Pontypridd on Boxing Day. Goalkeeper Zac Jones was handed a start, while defender Jazz Richards made a welcome return having not featured since October 1. Elsewhere, captain Dylan Rees came back into the side, with Elliot Scotcher fit to start alongside him in defence. Evans was selected to partner Harri John in the midfield.

There was very little goalmouth action in the early stages, with the only real moment of note coming when Jack Wilson’s inviting ball into the area just evaded the clutches of the outstretched Ben Fawcett, with any sort of contact likely to call Morris into action.

Dragons striker Ben Ahmun came close on the half-hour mark when he dragged his shot from the edge of the area just wide of the right post, before Jordan Davies’ header under pressure from Evans’ cross flew wide.

With half-time approaching, some neat interplay between Fawcett and Davies gave the latter space to put a cross into the area, however it just evaded his strike partner and the teams headed into the break goalless.

Pennock’s men were keen to start the second-half with purpose and find the opening goal, however it was Andrew Stokes’ side who found the net three minutes after the restart when Eliot Richards’ speculative cross into the area was fumbled by Jones, and Green was on hand to roll the ball into an empty net from point-blank range.

The healthy crowd of 560 would have expected this goal to open the game up and lead to plenty of chances, with the Bluebirds needing to get back into the contest, however this never really materialised as County struggled to break down a well-organised Dragons outfit.

The hosts huffed and puffed throughout the second period as they searched for an equaliser, but they lacked an attacking spark. However, there was just enough time for a telling intervention.

Midfielder Henry Jones, who was brought on with just under 10 minutes remaining, earned Haverfordwest County a free-kick 25 yards from goal, and Evans stepped up to strike the ball on target, with Morris fumbling twice and unable to prevent it finding the net to ensure the game ended level.

The Bluebirds are next in action on Saturday, January 7, when we travel to Park Hall to face league leaders The New Saints. Kick-off is at 2.30pm, and you will be able to follow live, play-by-play updates on our Twitter page.