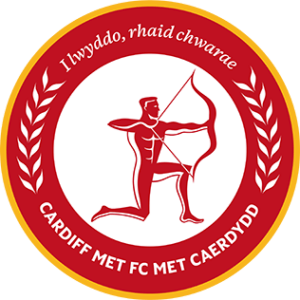 Manager Tony Pennock was pleased with the way his Haverfordwest County players stuck to their task as they found a late winning goal to defeat Cardiff Metropolitan 1-0 at the Ogi Bridge Meadow last night.

Jamie Veale’s free-kick gave the Bluebirds an important three points after a hard-fought battle with the Archers, who defended solidly throughout.

The win was the first for County since the end of August, and moves them up to seventh place in the JD Cymru Premier ahead of Saturday’s trip to Connah’s Quay Nomads.

It didn’t look like the goal was going to come for large part of the game, but it did in the end, and that’s a priceless three points isn’t it?

“It is. I thought Cardiff Met were very well organised, they got behind the ball in numbers and we found it hard to break them down, they limited our chances. We got down the sides a couple of times, maybe didn’t get the ball in the box to capitalise, but it was important we kept a clean sheet and hope the goal would come from somewhere. With our set-pieces at the moment, we always look a threat, and that was the case tonight.”

It must have been pleasing to see us eventually get our reward for showing the intent to win the game?

“I’ll never criticise a team coming away from home and sitting in and defending. They’ve got a couple of injuries, and it’s up to us to break them down, and we have to be good enough to do that. It took a while to do it, but we got there in the end.”

And with recent results, it was a good time to get back to winning ways ahead of a tough trip up north on the weekend?

“After the run we’ve been on, the draw on Saturday was important, it gave us a little bit of confidence. We were very good in the first half on Saturday, and we just talked about that before the game tonight, can we do it for longer periods than just 45 minutes.

“And as long as we stopped the ball going in net tonight, I think the boys’ confidence grew. Then they have to believe in themselves. They’re good footballers, they play good football, they pass the ball well. We all get a bit sloppy. We make mistakes, but, in fairness, you know, they kept going tonight and got what they deserved. I’m really pleased for the boys.”

It was nice to get the clean sheet as well, we defended well and didn’t really look like conceding did we?

“Clean sheets win games of football. We said that at half-time. The more clean sheets you keep, the more chance of winning football games you have, and whether it’s one nil or five nil, it doesn’t matter, you get three points. But one nil is always nice. It could have been a bit nervy towards the end. In fairness, they threw caution to the wind a bit, but the boys showed great resolve to block a few shots and defend the balls coming into the box, which is what we did in the first three games of the season, and we’ve just got to get back to those winning ways and defend in our whole box and getting on the end of ones in the box like we did tonight.”

We spoke about Corey Shephard returning on Saturday, and we also had Kyle Patten back this evening, and it looks like he was involved in the goal so a great impact from him?

“We’ve got a squad of players, and we need them all. We can’t rely on the youngsters all the time. They’re young, they’re learning their trade and it’s tough for them. So we need our experienced players to be fit and, unfortunately, it’s all our experience that we’ve been missing this season. Jazz on and off, Henry now for a few months, Pats, Sheps. The list goes on and on. Ricky Watts as well now. So we need our experience back. It’s a tough league for the young boys to come in and do what they’re doing. So we need to give them as much help as possible.”