Our report of Haverfordwest County's defeat to Taff's Well in the third round of the Nathaniel MG Cup. 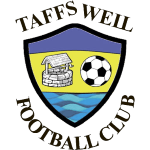 Haverfordwest County exited the Nathaniel MG Cup at the third round stage last night, following a 4-3 penalty shoot-out defeat to Taff’s Well after the game had ended 1-1 in normal time.

The Bluebirds fell behind to Ethan Cann’s first-half goal, but battled back after the break with Jack Wilson’s long range effort finding the top left corner.

County had numerous chances to take the lead after drawing themselves level, but were unable to make the most of them and ultimately paid the price.

Manager Tony Pennock made three changes to the side from Saturday’s game against Caernarfon Town, with Lee Idzi, Iori Humphreys and Harri John coming into the starting line-up. This marked 16-year-old John’s full debut for the club.

Jordan Davies was heavily involved throughout the game for Haverfordwest County, and the striker had a couple of opportunities to score early on as his shot on the angle went wide before his effort from inside the area was blocked, as the Bluebirds appealed for handball, but referee Richard Harrington waved play on.

Wilson was then played in by a lovely ball over the top just two minutes later, but his shot at the near post was saved by Edward King.

Idzi, who was making his first appearance since re-joining for a third spell with the club, made a sharp save to deny Cann after 18 minutes, however there was nothing he could do five minutes later. Just moments after Ben Fawcett’s cross-cum-shot had gone across the face of goal, just evading his teammate, the Wellmen went on the attack and took the lead when a back heel pass played Cann in, and he shot first time into the right corner to make it 1-0.

Pennock’s side came agonisingly close to an instant response when Wilson’s powerful effort was saved, before a header on the rebound hit the crossbar and bounced down onto the goal line, allowing the hosts to clear the danger.

Wilson had already found the net five times this season prior to the game, and so the 200+ onlookers would have expected the net to bulge when the ball found its way to the winger inside the area, however his low effort took a deflection which saw it roll wide of the right post.

Jordan Davies then showed good strength to beat off the challenge of Riccardo Mackenzie and sprint through on goal, but his effort was saved by King to ensure the Bluebirds trailed at half-time.

County weren’t able to create chances as easily as they did in the first-half in the opening 15 minutes of the second period, as Taff’s Well striker Jan Maertins saw his shot come back off the right post.

However, shortly after the hour mark, the visitors drew themselves level in somewhat fortuitous circumstances as Wilson’s attempted cross ended up flying into the top left corner to tie the game up with his sixth goal of the season.

Now with the confidence to go on and make their dominance tell on the scoreline, the Bluebirds appealed for a penalty when Fawcett appeared to be brought down after Jordan Davies’ flicked header had played his strike partner in, however referee Harrington saw nothing wrong.

Wing-back Rhys Abbruzzese had not long come on to replace Ryan George when he showed expert control and awareness to take a cross field pass in his stride and break free into the area, before dragging his shot just wide of the right post.

Fawcett was next to threaten the Wellmen goal as his effort went wide, before Jordan Davies blazed his shot over the bar from inside the area after receiving the ball from Harri John.

Pennock and his team must have thought they’d scored a late winner when Fawcett tried his luck from a tight angle, with the ball eventually finding its way to Harri John who shot first time and somehow saw his effort tipped over the bar by King to deny the youngster a dream full debut.

With neither side able to break the deadlock, the game was decided by a penalty shoot-out.

Captain Dylan Rees stepped up first and saw his spot kick saved, before Mackenzie converted to make it 1-0. Jordan Davies and Jamie Owen then traded successful penalties, as Elliot Scotcher and Maertins were also on target from 12 yards. Fawcett then found the net, before Wellmen captain Marcus Jones fired home to make it 4-3. This meant Wilson had to score with the Bluebirds’ fifth penalty, and his effort hit the crossbar to end the tie and County’s interest in this season’s Nathaniel MG Cup.

The Bluebirds are next in action on Saturday, September 24, when we host Flint Town United at the Ogi Bridge Meadow. Kick-off is at 3pm.